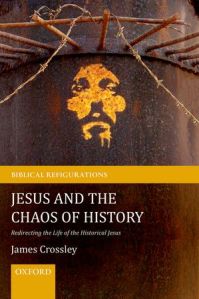 There is a symposium at Syndicate on James Crossley’s book, Jesus and the Chaos of History: Redirecting the Life of the Historical Jesus (2015).

The following critical responses to the book are available on the Syndicate website:

“How Chaotic is the Kingdom Tradition?” by Brent Driggers, November 25, 2015

Response by James Crossley, “The Dictatorship of God Is among You? A Response to Ira Brent Driggers”, November 25, 2015

Response by James Crossley, “Jesus and the Permanent Revolution? A Response to Rafael Rodriguez”, November 30, 2015

An audio recording of an SBL panel session on Memory in Historical Jesus Research (Baltimore, 2013) is available on Anthony Le Donne and Chris Keith’s blog. The quality is not particularly good and the first four minutes of Chris Keith’s paper are missing. The audio is in two parts:

Chris Keith, ‘The Past Approaching and Approaching the Past: The Contribution of Memory Studies to Historical Jesus Research’

2. The panel discussion and questions