“An author-led discussion of the afterlife in the Classical and Biblical worlds. Oxford author Bart Ehrman (The New Testament: A Historical Introduction to The Early Christian Writings, Seventh Edition; A Brief Introduction to The New Testament, Fourth Edition; and The Bible: A Historical and Literary Introduction, Second Edition) explores a variety of fascinating questions: How did the ancient Greeks and Romans think of life, death, and the afterlife? How are these phenomena depicted in the Old Testament? What were the views of the historical Jesus? How did they change after his death? And how do all these ideas differ from those widely held in the Christian world today?”

“Heaven and Hell: A History of the Afterlife

– What the bible says about the afterlife
– What Jesus really said about heaven
– Myths: their original purpose
– Real meaning of the resurrection

– Is the Kingdom of Heaven within us?”

“She interviews Bart D. Ehrman on March 31, 2020, and centers the discussion to reflect on Bart’s book “Heaven and Hell: A History of the Afterlife.” Bart, the best-selling author of Misquoting Jesus takes on two of the most gripping questions of human existence: where did the ideas of heaven and hell come from, and why do they endure? He recounts the long history of the afterlife, ranging from The Epic of Gilgamesh up to the writings of Augustine, focusing especially on the teachings of Jesus and his early followers. He discusses ancient guided tours of heaven and hell, in which a living person observes the sublime blessings of heaven for those who are saved and the horrifying torments of hell for the damned.”

“Seán Moncrieff hosts an eclectic Irish radio show on Newstalk which is operated by News 106 Limited, a subsidiary of Denis O’Brien’s Communicorp. He interviewed Bart on January 13th, 2020 during a seven-minute spot in brief discussion about his new book, “Heaven and Hell: A History of the Afterlife” to be published by Simon & Schuster. The interview asked questions like: Was Heaven and Hell discussed in the Old Testament? Does Judaism believe in the afterlife? Did the belief in Heaven and Hell exist during Jesus’ lifetime? Did there exist an early belief that a deceased person entered limbo after death? Doesn’t the physical depictions of Hell only make sense if a person is physically tortured? Why do more people in the U.S. believe in Heaven than in Hell? Other thoughts are considered during this succinct segment.”

The talks are based on his recent book, Heaven and Hell: A History of the Afterlife (Simon & Schuster, 2020).

The debate was hosted by the freethought group Mythicist Milwaukee, at their 2016 Mythinformation Conference.

Professor Bart Ehrman (University of North Carolina at Chapel Hill) delivered a series of three lectures on January 29-31, 2016, on the subject of his book, How Jesus Became God (2014). The lectures were held at Coral Gables Congregational Church, Coral Gables, Florida.

On February 12-13, 2016 at New Orleans Baptist (NOB) Theological Seminary, Professor Bart Ehrman and Dr Michael Bird debated the content of and issues surrounding Ehrman’s recent book, How Jesus Became God: The Exaltation of a Preacher from Galilee (HarperOne, 2014). Michael Bird is the co-editor of a response volume, How God Became Jesus: The Real Origins Of Belief In Jesus’ Divine Nature—A Response To Bart D. Ehrman (Zondervan, 2014). The debate took place as part of the annual Greer-Heard Point-Counterpoint Forum in Faith and Culture.

“HOW DID JESUS BECOME GOD?” Bart Ehrman and Michael Bird in Dialogue + Q&A”

Simon Gathercole, “Monotheism among Jews and Christians” with responses from Bart Ehrman and Michael Bird (from 19:10)

Dale Martin, “The Theological Inadequacy of Historiography: the Empty Tomb in History and Theology” with responses from Bart Ehrman and Michael Bird (from 1:38)

Larry Hurtado, “The Significance of Earliest Devotional Practices” with responses from Bart Ehrman and Michael Bird (from 5:10)

Jennifer Wright Knust, “Modernity’s Vanishing Point: Histories of Jesus and the Retreat of Authenticity” with responses from Bart Ehrman and Michael Bird (from 15:35)

Concluding Comments from Bart Ehrman and Michael Bird (from 1:55)

Biblical scholars have long recognized the discrepancies between the four New Testament Gospels and the difficulties that result in determining who Jesus really was. Can these four Gospels be relied upon to give us an accurate account of Jesus’s words and deeds? Bart brings to bear his analysis and lengthy scholarship to answer this question.

Professor Bart Ehrman delivers a 12-part lecture course on the making of the New Testament, as part of The Great Courses series. The course has been made available on archive.org.

How many of us, Christian or otherwise, are as knowledgeable about the New Testament as we would like to be? Even many who consider themselves Christian find themselves asking some—perhaps even all—of the questions so often posed by those who are not.

What different kinds of books are in the New Testament? When, how, and why were they written? What do they teach? Who actually wrote them? How were they passed forward through history? And, perhaps most important of all, why and how did some books, and not others, come to be collected into what Christians came to consider the canon of scripture that would define their belief for all time?

In The History of the Bible: The Making of the New Testament Canon, Professor Ehrman offers a fast-moving yet thorough introduction to these and other key issues in the development of Christianity.

Drawing on the award-winning teaching skills and style that have made him one of our most popular lecturers—respectful yet provocative, scholarly without sacrificing wit—Professor Ehrman has crafted a course designed to deepen the understanding of both Christians and non-Christians alike.

“The New Testament is appreciated and respected far more than it is known, and that’s not just true among religious people who consider themselves Christian. …

“This set of lectures is designed to provide an introduction to the New Testament for people who recognize or appreciate its cultural importance, or who have religious commitments to it, but who have not yet had a chance to get to know where it came from, what it contains, and how it was transmitted down to us today.

“The focus in this course will be historical, rather than theological. The course does not either presuppose faith or deny faith. It’s based neither on faith nor skepticism. … It’s simply taught from the perspective of history.” 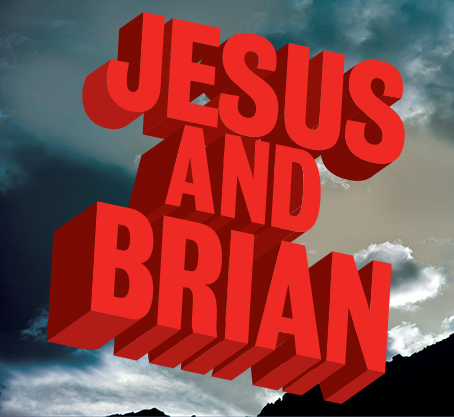 The Jesus and Brian Conference explored “the historical Jesus and his times, via Monty Python’s Life of Brian“. The conference was held on Friday 20 June to Sunday 22 June 2014, at the Edmond J Safra Lecture Theatre, King’s College London. Videos from most of the talks are now available on YouTube (see below).

Monty Python’s Life of Brian provoked a furious response in some quarters when it first appeared in 1979, even leading to cries of ‘blasphemy’. However, many students and teachers of biblical literature were quietly, and often loudly, both amused and intrigued. Life of Brian in fact contains numerous references to what was then the cutting edge of biblical scholarship and Life of Jesus research, founded on the recognition of the historical Jesus as a Jew who needs to be understood within the context of his time. Implicitly, in setting ‘Brian’ within the tumultuous social and political background of his age, Life of Brian sets Jesus within it also. It assumes the audience has some knowledge of the gospel accounts, which directly inform the comedy.

Ever since Philip Davies first wrote on the film 15 years ago, other scholars too have turned their gaze to consider exactly what Life of Brian does in regard to Jesus scholarship, and have increasingly delved into its curious corners to reflect on what it says both about the tumultuous times of Jesus and also contemporary scholarly discussions. Biblical scholarship has moved on greatly in the past 25 years, and various aspects of Life of Brian correlate with themes now intensely explored. Every Bible scholar knows what ‘blessed are the cheese-makers’ means!

Professor Martin Goodman (University of Oxford): ‘The Life of Brianand the Politics of First-Century Judea’

Professor George Brooke (University of Manchester): ‘Brian as a Teacher of Righteousness’

Interview with John Cleese and Terry Jones, with Richard Bauckham

Dr Helen Bond (University of Edinburgh): ‘You’ll Probably Get Away With Crucifixion’: Laughing at the Cross in Brian and the Ancient World

Professor Steve Mason (University of Aberdeen): ‘What Have the Romans Ever Done for Us? Brian and Josephus on Anti-Roman Sentiment‘

Professor Paula Fredriksen (Boston University): ‘Are you a Virgin? Biblical Exegesis and the Invention of Tradition’

Katie Turner (King’s College London): ‘”The Shoe is the Sign“:The Costuming of the Life of Brian and the Clothing of First-Century Judaeans’

Dr David Tollerton (University of Exeter): ‘Blasphemy! On Free Speech Then and Now‘

(no video provided by Kings College)

Episode one (mp3) (the discussion on How Jesus Became God begins at 7:30)

New Testament scholar Bart Ehrman’s latest explosive book ‘How Jesus Became God’ claims that the early church turned Christ into the son of God, but Jesus himself never believed it and nor did his first followers.

Episode two (mp3) (the discussion on How Jesus Became God begins at 1:30)

The second episode in which Bart Ehrman defends his latest book ‘How Jesus Became God’ against Simon Gathercole. Ehrman claims that the early church turned Christ into the son of God. In this episode they discuss the earliest Christian writings in Scripture, and whether St Paul viewed Christ as a highly exalted being or as God himself.

Simon Gathercole is a contributor to an evangelical Christian response book, How God Became Jesus: The Real Origins of Belief in Jesus’ Divine Nature (Zondervan, 2014).

In the first video, Ehrman is interviewed by Harry Kreisler (2008):

Conversations host Harry Kreisler welcomes biblical scholar Bart Ehrman for a discussion of his intellectual odyssey with a focus on how the Bible explains the problem of human suffering. The conversation includes a discussion of the challenges of biblical interpretation when confronting this age old problem of the human condition. Included are topics such as the contribution of the prophets, a comparison of the old and new testaments, the book of Job, and the emergence of apocalyptic writers.

The second video is a UC Berkeley Graduate Council Lecture, “God’s Problem and Human Solutions: How the Bible Explains Suffering” (2008).

The discussions draw on material from Ehrman’s book, God’s Problem: How the Bible Fails to Answer Our Most Important Question – Why We Suffer (2008).