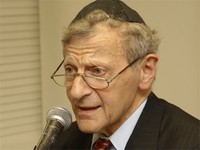 Professor Louis Feldman (October 29, 1926 – March 25, 2017) delivered two lectures on “Admiration of the Jews in Ancient and Classical World” on February 25, 1996. The talks are made available by Yeshuva University’s YUTorah Online.

On March 24, 2014 at Westmont College, Mark D. Nanos (Rockhurst University, Kansas City) probes the identity of the Apostle Paul in a lecture entitled, “Paul’s Relationship to Jews and Judaism in First-Century Context: Revisiting the Translation of Romans 11”.

“Romans 11 continues to be a central text for Christian perceptions of Jews and Judaism,” Nanos says. “Current translations give the impression that Paul was a Christian who perceived Jews who did not believe in Jesus as Christ to be hardened and cut off from the covenants God made with Abraham and Israel, as if Judaism no longer represented Paul’s own identity.”

Nanos will explain why these are not the most accurate choices for interpreting Paul’s message in its original first-century context. He will also explore how a new approach to Paul’s message from within Judaism can contribute to advancing Christian-Jewish relations today.

Professor Daniel Boyarin (University of California at Berkeley) delivered the 2015 Bampton Lectures in America, at Columbia University. In these lectures, Boyarin examines the use and applicability of the term “Judaism” in the pre-modern period. Much of the content of his lectures will be published in his forthcoming book, Judaism: A Genealogy, Key Words in Jewish Studies (New Brunswick, NJ: Rutgers University Press). 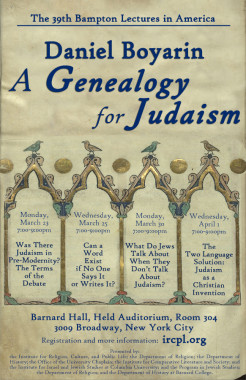 In this series of lectures, Daniel Boyarin proposes that scholarship ought to resist using the term “Judaism” with reference to the pre-modern period. As has been argued by several scholars already, there is no “native” term with this meaning in antiquity or the Middle Ages. There is, moreover, no evidence that Jews divided off one category of their experience and practice and named it their religion. It is, therefore, a falsification of the evidence to pick out an entity and name it “Judaism.” A theoretical argument against using modern categories to analyze ancient realities will be advanced as well.

The first two lectures are available in mp3 audio format.

Monday, March 23
Was There Judaism in Pre-modernity?: The Terms of the Debate (lecture begins at 10:00)

Monday, March 30
What do Jews Talk About When They Don’t Talk About Judaism?

Wednesday, April 1
Can a Concept Exist Without a Word?

In thinking about the terms of the debate, one of the first questions that needs to be asked is: ‘what is the term about which we are debating?’ What do scholars mean when they are referring to ‘Judaism’ in antiquity. The most obvious and immediate answer is that Judaism is the religion of the Jews. One clear proponent of this idea is L. Michael Bird [sic], who has written,“Yet I remain unconvinced that it was Christianity that instigated the separation of cult from culture and then fostered the origin of ‘religion’ upon which the religion of Judaism was signified over and against Christianity and foistered upon Jews. Ioudaismos was considered a religio or a thrēskeia in the pre-Christian era long before Jesus, Paul, Luke, or John.” It is remarkable to me that a scholar writing in the twenty-first century, and in a journal called The Bible and Critical Theory, no less, is so incredibly self-unconscious in his deployment of the term ‘religion’…. No such concerns trouble Bird, as he defines Judaism as a religion, because, as he claims, something called Ioudaismos allegedly was referred to as a religio or as a thrēskeia in the pre-Christian era. The logic seems to be that there is something essential called ‘religion’; its names in the classical languages are known: thrēskeia in Greek, religio in Latin; and something called Ioudaismos is called by those names; ergo: Ioudaismos, now renamed ‘Judaism’, was a religion. Every single one of those premises, as well as the mode of inference which leads to the conclusion, is flawed.
– Daniel Boyarin (16:40-)

The first lecture (21 October, 2014) is on ‘Torah and Jewish Identity in Second Temple Judaism’:

The second lecture (22 October, 2014) is on ‘Non-Mosaic Forms of Judaism in the Second Temple Period’: 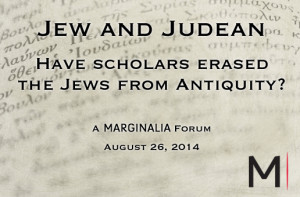 The essay and responses are available for download in epub and mobi formats.