The discussion is the tenth in the Centre for the Social-Scientific Study of the Bible’s 2020 Online Discussion Series.

The fifth of the 2020 CSSSB Online Discussion Series is held on Monday, May 11, at 7pm BST (2pm EST/11am PST). Prof Mark Goodacre and CSSSB’s Prof Chris Keith discuss “John’s Knowledge of the Synoptics.” 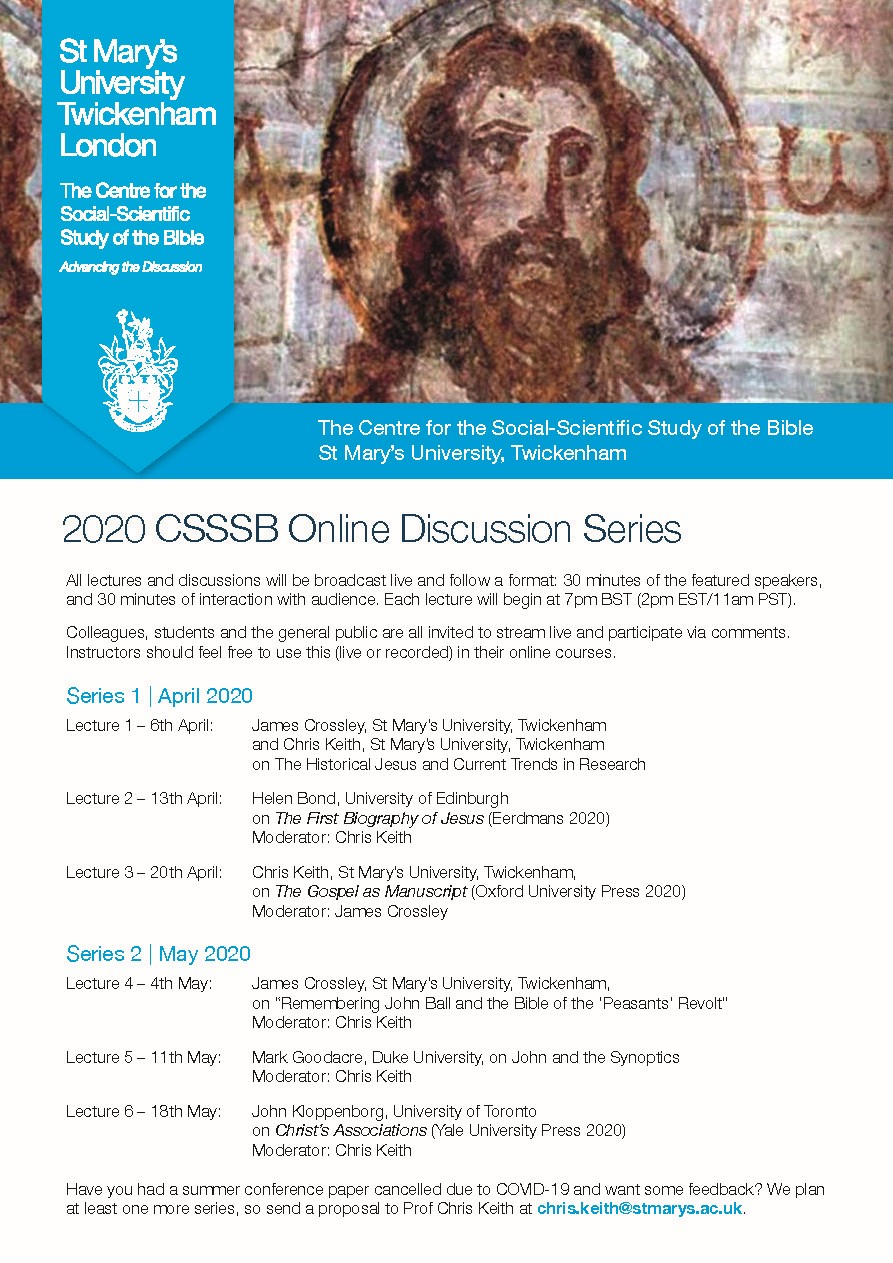 The Better Questions Podcast interviews Chris Keith, Research Professor of New Testament and Early Christianity at St Mary’s University, Twickenham. While the title of the podcast is “Are the Gospels Historically Accurate?”, Keith takes his cue, perhaps from the lyrics of “11 O’Clock Tick Tock”, and answers other questions:

“What is Social Memory Theory? What assumptions do we have about history? Did people in the first century think about recording history in the same way that we do? Did the events in the Gospels happen exactly as described? How can we know with 100% certainty? Does it matter?”

“We thought that we had the answers, it was the questions we had wrong”
– U2, “11 O’Clock Tick Tock”

A conference on Luke and Acts, “L’opera lucana (Vangelo di Luca e Atti degli Apostoli)”, was held at the Pontifical Biblical Institute (Rome), from January 21-25, 2018. The papers are in a mix of Italian and English.

Prof. Jean-Noël Aletti, The prophetic typology in the Gospel of Luke [Italian]

Prof. Matteo Crimella, The use of the Old Testament in the Gospel of Luke

Prof. Antonio Landi, The figure of Peter in the Lucan works [Italian]

Prof. Luke Macnamara, The figure of Paul in the book of Acts [English]

Ian Nelson Mills (Duke University) explains what the Synoptic Problem is, and why it is not boring. The video is from the New Testament Interpretation course at Duke Divinity School.

Lecture 1: What is the Kingdom of God?

Wednesday 19th March
Lecture 2: The Kingship of God in the Old Testament

Wednesday 26th March
Lecture 3: The Kingdom of God in the preaching of Jesus

Wednesday 2nd April
Lecture 4: The Kingdom of God in Paul and John

On May 25, 2018, The Centre for the Social-Scientific Study of the Bible at St Mary’s University, Twickenham held a one-day seminar, “Social-Scientific Criticism and Christian Origins: Past, Present and Future”.

‘Social-Scientific Criticism’ now serves in New Testament studies as an umbrella term for a variety of critical approaches to early Christianity, which include cultural anthropology, social identity theory, social history, ancient and modern media studies, memory theories, human geography, ancient and modern politics, race theory, trauma studies, and others. This conference gathers leading scholars to answer that question and track the progress of the scholarly discourse from initial applications to the current state of the discussion, as well as offer thoughts about the future.

9.10-9.20am Introduction to the Conference
Chris Keith

Session 1 Theoretical Origins and Texts
9.20-9.50am ‘From Honour and Shame to Theorizing Christian Origins’
John Kloppenborg

9.50-10.20am ‘Competitive Textualisation in the Jesus Tradition’
Chris Keith

12.10-12.40pm ‘The Death of John the Baptist and the Sociology of Beheading in the Ancient World’
Nathan Shedd

Professor James Crossley (St Mary’s University) presents a paper drawn from his book, Cults, Martyrs and Good Samaritans: Religion in Contemporary English Political Discourse (Pluto Press, July 2018). The paper was presented at the CSSSB conference, Christian Origins and Social-Scientific Criticism, on May 25, 2018 (Crossley appears at 2:50)  There were two responses to his paper, from Dr Hannah M. Strømmen (University of Chichester) and Professor Yvonne Sherwood (University of Kent), not included in the video. 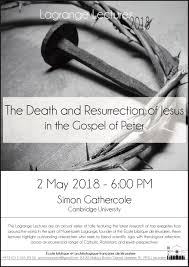 Dr Simon Gathercole (Cambridge University) delivered the third Lagrange Lecture at the École biblique et archéologique française de Jérusalem, on May 2, 2018, entitled “The Death and Resurrection of Jesus in the Gospel of Peter”.

Gathercole examines how the Gospel of Peter takes the traditions in the canonical gospels, and rearranges them, in part in order to blame “the Jews”.

Jörg Frey, Professor of New Testament at the University of Zurich, gives his three-part Shaffer Lectures at Yale Divinity School on January 23, 25, and 30, 2018, on “Theology and History in the Fourth Gospel.”

The three lectures are as follows:

There are a few podcasts and radio segments about on the biblical accounts of the birth of Jesus. Here are three:

Dr Alan Garrow presents a studio version of the paper presented at the NT Research Seminar of the University of Durham on Monday 12 January, 2015 (h/t: Chris Tilling):